These words reflect the people of Vietnam but they can also describe the country’s countless beaches. Long and narrow, Vietnam boasts 2,140 miles of coastline — and that doesn’t include its many islands.

From lively and popular to unspoiled and wild, there’s a beach for every type of traveler. Some sun seekers flock to popular tropical hotspots such as Nha Trang while more adventurous souls motorbike the entire length of coast, from Gulf of Tonkin down to the Gulf of Thailand seeking empty beach after empty beach.

Motorbiking isn’t the practical option for most (do leave it to the experts). These are Vietnam’s seven best beach destinations, no helmet or driving license required. 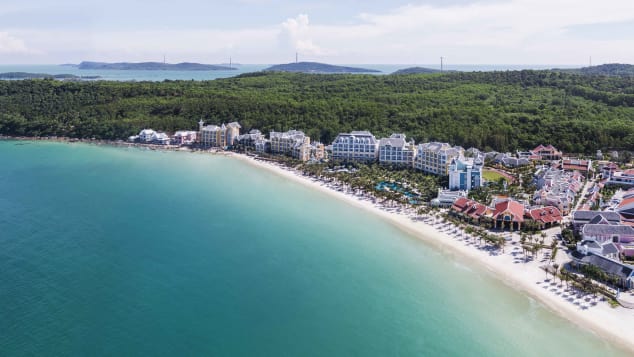 With a population of 96 million people, Vietnam is more famous for metropolises and motorbikes than tropical idylls.

However, the country’s largest island boasts not too crowded beaches including the aptly named Long Beach.

Located in the Gulf of Thailand, it stretches over 12 miles with clear water, soft beige sand and beachfront accommodation that unfurls against a backdrop of languid palms and jungle-cloaked mountains.

Vendors in conical hats sell sweet pineapple, dragonfruit and coconuts to sunbathers. Phu Quoc is renowned for its sunsets and at the golden hour, locals and visitors converge on Long Beach for a playful splash, cold beer, a game of soccer or a final paddle into the glowing horizon.

At night, barbecues sizzle with the catch of the day: fish of every shape and size, shellfish and squid. It’s a little too easy to slip into the laid back, somnambulant rhythm. 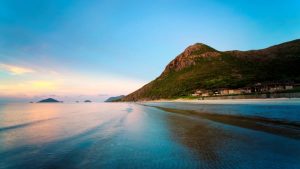 A blip of 16 rocks off the southeastern tip of Vietnam, remote Con Dao Islands reward those who make the one-hour flight with deserted beaches, edge-of-the-world coastline, turquoise water and the best diving the country has to offer.

Some beaches on the main island Con Son are easily accessible, while others can only be reached by hiking through the national park, imparting a castaway feel. Six Senses Con Dao is the sole five-star resort here, its private shore dramatically nestled at the foot of a mountain.

The friendly locals, easygoing pace and rugged natural beauty are a stark contrast to the island’s dark history. For more than a century French colonialists, then the American-backed South Vietnam, used Con Son as a prison. By the time the prisons were closed in 1975, 20,000 people had died. The buildings are open to visitors, a somber note in an otherwise beach lover’s paradise.

An Bang, Hoi An 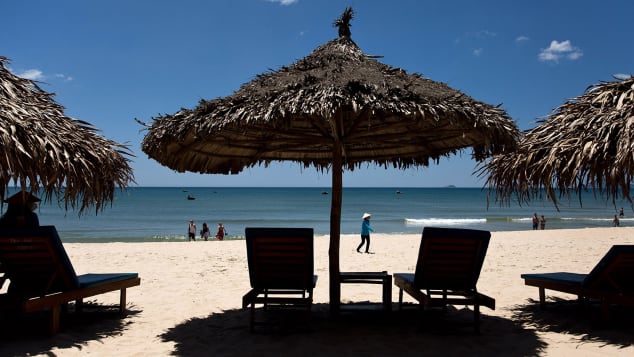 An Bang is still free of large tourism development, but it’s only a matter of time before someone takes notice.
DALE DE LA REY/AFP/AFP/Getty Images

Three miles from the UNESCO World Heritage town of Hoi An, An Bang is surprisingly unpretentious for a beach so close to a major tourist attraction. Once Hoi An’s 18th-century shophouses and temples have been fully explored, cycle past vibrant green rice paddies and water buffalos to reach the ocean for a day of lazing in the sun.

An Bang attracts a mixed crowd, both Vietnamese and foreign tourists young and old. Casual, family-friendly shacks offer cold drinks, loungers and live music, as well as a lively, beach bum vibe. The optimal time to hang out is dry season from March to September, when An Bang’s calm waters are the remedy to blistering Central Coast temperatures.

Unlike the shoreline running north towards the city of Danang, which is dotted with upscale resorts, for now An Bang is free of large development but it is only a matter of time before someone takes notice. 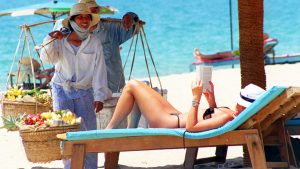 Perhaps the most famous beach in Vietnam, Nha Trang — in the city of the same name — is four miles of sand, palms and warm water, all of it free and accessible to the public.

Its star quality is that it delivers hotels of every size and budget, international dining and attractions — and plenty of distractions including watercraft for rent, cheap boat trips, diving and an amusement park on a nearby island connected by cable car. It’s also easy to get to and it comes as no surprise that Nha Trang draws sun-seekers from around the world, including a lopsided number of Russian tourists.

Some visitors like it hot, while others may want to escape the crowds by heading south where resorts have opened along the sprawling, windswept coast down to Cam Ranh International Airport, the gateway to the destination. An hour’s drive to the north, Doc Let’s white sand is popular with day-trippers. 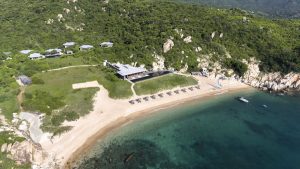 Perched on a hillside bordering Nui Chua National Park, the luxury Amanoi is home to a private sheltered cove of soft sand and a beach club restaurant.
courtesy Amanoi/Aman Resorts

Designed by Jean-Michel Gathy, the resort’s refined architecture showcases Nui Chua National Park, a semi-arid landscape where hardscrabble vegetation and boulders cling to deserted hills. There are heart-stopping clifftop views of Vinh Hy Bay while pathways slope down to a private sheltered cove of soft sand and a beach club restaurant.

Venturing outside Amanoi reveals just how off the grid it is. To the north, hard-to-access beaches pepper the rugged coast. Venture to Binh Hung island and a boat can shuttle you to one of its floating restaurants. Fine dining this is not, but you’ll feel rich when a feast of lobster, the local specialty, arrives at your plastic table. 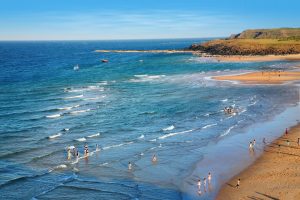 What was, up until recently, a sleepy fishing village, Bai Xep beach has turned into a sleeper hit for all budgets. The modestly sized backwater bay six miles south of coastal city Qui Nhon (itself an under-the-radar destination in Central Vietnam) is now home to a five-star hotel and two backpacker guesthouses representing some of the most affordable beachfront accommodation in the whole country.

Women sit untangling nets as fishermen paddle ashore in coracles, traditional woven basket boats — hop in and learn how to row the wobbly vessels for the price of a few beers. Bai Xep maintains a local, low-key vibe.

A boat trip to one of the uninhabited isles off shore for Robinson Crusoe exploration or a few bays up or down for fresh seafood lunch will counter the languid hours spent relaxing in a hammock. Hurry, as Bai Xep will surely be put on the map. 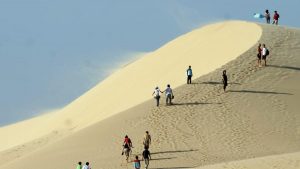 Only 130 miles east of mega metropolis Ho Chi Minh City, Mui Ne is more than just a sandy spot where land meets sea. Consistent cross-onshore winds and affordable hotels have turned it into the kitesurfing mecca of Southeast Asia. Enthusiasts spend the best months of October to March gliding on water and soaring through air. Beginners can get up to speed with lessons from one of the many schools.

Other watersports have taken off and visitors can indulge in surfing, windsurfing, standup paddleboard and sailing, though there’s a fair amount of inactivity to be done as well, especially at one of the many beach restaurants and bars.

Mui Ne’s limited public beach access and unbridled development may not be to everyone’s taste. However, the traditional fishing harbor and nearby gigantic red and white sand dunes are great spots outside the tourist strip to catch the sunset.