Rest your head in one of these cool places 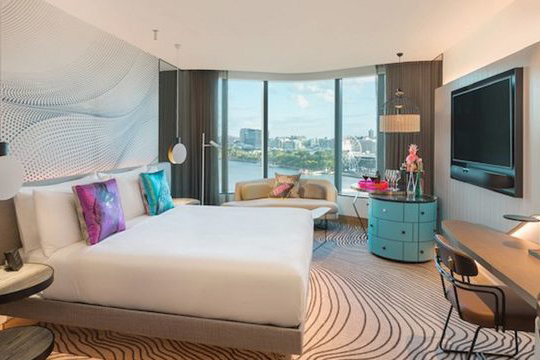 (CNN) – Whether it’s for business or pleasure, travelers these days are savvier than ever about their hotel choices. They demand ultraluxe amenities, show-stopping design, Instagrammable views and unparalleled comfort. Circulation-boosting pillows, anyone?

And that’s just for starters.

Luckily, the newest batch of hotels and resorts have stepped up to the travelchallenge.

From castaway-chic bungalows in the Caribbean and the Maldives to sleek hideaways in the hearts of Paris and Barcelona, we’ve handpicked 15 incredible new hotels where you’ll love your stay in 2019.

The property marks W Hotels’ long-anticipated return to Australia (the first W opened in Sydney a decade ago, only to be rebranded shortly after opening), with hotels in Melbourne and Sydney slated to open in 2020.

Though it’s just 15 minutes’ drive from the airport in the Baha Mar resort complex, the Bahamas’ newest resort feels like its own private island hideaway.

Hong Kong-based Swire Hotels is fast becoming known for its hip, luxurious, design-focused boutique hotels such as celebrity favorite The Upper House, and its newest property is no exception.

Opened in Shanghai in April 2018, The Middle House blends moody minimalism with classic Shanghainese design and bold statement pieces, such as the tiered, 3,760-piece glass chandelier hanging in the otherwise bare lobby.

Its 213 rooms are similarly striking, with charcoal-colored bamboo floors and a clean modern design that allows the showstopping skyline views to take center stage.

The storied Cadogan Hotel — the former pied-à-terre of Oscar Wilde, who resided in Room 118 — will reopen in February 2019 as the Belmond Cadogan after a four-year, $48-million renovation.

First opened in 1887, the historic hotel retains elements of its original Queen Anne design, such as its wood-paneled walls, stained-glass windows, mosaic floors and wood-burning fireplaces.

However, rooms have been updated with contemporary art and furniture. And the hotel at large will see the addition of a tea lounge and fine dining restaurant helmed by award-winning chef Adam Handling.

Opened in January 2018, this 50-room boutique hotel is as chic as it gets with its cheeky mix of Marie Antoinette glamour (think silk-draped four-poster beds and jewel-toned velvet settees) and Brooklyn hipster minimalism (whitewashed walls, handmade driftwood stools and tables).

Though it sits in the buzzy 2nd arrondissement, close to all the major sights, its discreet location in an alley off the main drag makes it feel like an intimate hideaway.

But its main draw? Its price. You can book rooms for as low as $160 per night for the spring and summer — practically unheard of for a hotel of this luxury and caliber in the heart of Paris.

Visionary hotelier Ian Schrager’s EDITION brand is fast becoming an empire, with three new properties in 2018 and two slated to open in 2019. Of the lot, the 100-room Barcelona EDITION, opened in September 2018, is the standout.

For starters, the hotel is a knockout, with swooping modern staircases and airy, high-ceilinged spaces, accented with eclectic art and pops of bright color.

And then, of course, there are the endless diversions: the scenic rooftop pool, the speakeasy-inspired Punch Room bar, and its sultry basement supper club, Cabaret, which is a destination unto itself with its gastronomic tasting menu and live entertainment.

Though the Fairmont is known best for its city hotels such as The Plaza and The Savoy, its first foray into the Maldives is impressive, to say the least.

Hotel highlights include an Ayurvedic spa, three restaurants and the resort’s pièce de résistance: an underwater art gallery, which guests can reach by snorkeling through an undersea pathway.

Opened in February 2018, the COMO is the first five-star resort to open in the bohemian coastal village of Canggu.

The upscale resort features 119 sleek guest rooms, many of which open up to the resort’s curvy, 350-foot lagoon — though what you’re here for are the 12 penthouse suites with their swooping oceanic architecture and rooftop infinity pools.

Like all COMO resorts, the crowning jewel is the legendary COMO Shambhala spa, which offers eight luxurious treatment rooms and a dizzying array of holistic Balinese therapies.

Known for eco-friendly luxury camps across Namibia and Botswana, conservation-focused safari company Natural Selection will open its first South African property in April 2019 — and it’s one to watch.

Rooms are earthy and cozy and outfitted with wood-burning stoves — not that you’ll spend much indoors. The camp sits within the game-filled De Hoop Nature Reserve and overlooks a marine-protected area where 1,116 whales were spotted in 2018.

With just 16 rooms, the Nobu Ryokan is one of the most exclusive new hotels in the world, which isn’t surprising, considering the property is the brainchild of celebrity chef Nobu Matsuhisa and Robert De Niro.

Modeled after a traditional Japanese ryokan, or inn, the rooms are almost monastically minimalist with their ipe wood floors and simple teak furnishings, yet are undeniably luxurious, perched literally on the sands of Malibu’s “Billionaire’s Beach.”

As if the luxury and privacy weren’t enough of a draw, beginning summer 2019, guests will also be able to swim in an ocean-facing pool mere steps from the Pacific Ocean.

Opening in January 2019, Jumeirah’s newest property, nestled deep in the desert, is one of its most luxurious yet.

Modeled after an oasis, Jumeirah al Wathba is built around a 1,000-square-foot pool and filled with lush gardens and exquisite fountains, inspired by an oasis’ natural falaj, or water system.

Hotel highlights include 13 lavish villas with private plunge pools that open directly out onto the desert and a sumptuous Talise spa with two hammams, cryotherapy chambers and deep-soak hot tubs perfect for chilly desert evenings.

The InterContinental’s newest resort, opened in June 2018, is worth a visit for its stunning location alone: it sits on a pristine white sand beach on the lush island of Phu Quoc, a UNESCO-listed World Biosphere Reserve.

The resort itself — though not as extravagant as its infamous Bill Bensley-designed sister property in Da Nang — is sleek and incredibly luxurious, with oversized rooms and lots of breezy outdoor spaces that take advantage of the property’s perfect beachfront location.

The resort’s biggest highlight, however, is its spa. Designed by award-winning Vietnamese architect Vo Trong Nghia, its open-air bamboo treatment suites appear to float peacefully atop a shimmering private lagoon.

Though the Four Seasons will open six new hotels across the globe in 2019, the hotel group’s foray into California wine country is the one to watch.

Slated to open in summer 2019, the farmhouse-inspired resort will feature 85 plush guest rooms and 20 residences — two- to four-bedroom properties ideal for longer-term stays — scattered amidst a six-acre vineyard.

Not surprisingly, the resort will have its own on-site winery, helmed by award-winning winemaker Thomas Rivers Brown, where guests will be able to taste and even blend their own wines.

No effort or expense was spared by Hong Kong-based Wharf Hotels in turning the city’s iconic Murray Building, built in 1969, into the flagship hotel of its luxury Niccolo brand.

A whopping US$1 billion was spent on creating The Murray and it shows. Everything from its energy-efficient recessed windows to its 336 guest rooms — the largest in the city — feels thoughtful and luxurious.

Beds, for example, are dressed in 1,000-thread-count linens and there’s even a pillow menu with 16 kinds of pillows, including one with circulation-boosting magnets.

Even if you’re not staying the night, the hotel offers many reasons to stop by, from the intimate art-filled lobby bar to the chic rooftop restaurant with its Instagrammable skyline views.

Originally opened as a simple tented camp in 2014 — the first of its kind in the Eastern Serengeti — Namiri Plains was completely rebuilt from the ground up and is slated to debut in summer 2019.

Each suite will also boast a wooden sundeck outfitted with a deep-soaking outdoor tub for guests to enjoy, but be warned: This is big-cat territory, so don’t be surprised to find wild cheetah roaming casually in the distance as you bathe.