Come September 2013, travelers to Vietnam’s former Imperial City can once again touchdown and take off from the Phu Bai International Airport outside of Hue.

Vietnam’s transport authorities have green-lighted the airport for an early re-opening on Sept. 20, 2013 – two months ahead of schedule. The airport closed its doors on March 20 for runway repairs and upgrades, estimated between 500 and 600 billion Vietnam dong.

Located 15 kilometers from the city centre, Phu Bai Airport is the main gateway to Hue, Vietnam’s ancient capital and the seat of power during the reign of the Nguyen Dynasty. Hue’s well-preserved citadels, tombs and pagodas have been recognized by UNESCO and are among the country’s top cultural attractions.

“Restoring direct access to Hue is a crucial step in enticing visitors and boosting the city’s profile,” said Phan Trong Minh, general manager at the five-star La Residence Hotel & Spa. “Now that logistical issues are out of the way, Hue can reclaim its place as one of Vietnam’s most alluring — and accessible — destinations.”

The improvements on the Phu Bai International Airport are part of the government’s plans to develop Hue and Vietnam’s central coast as key tourism destinations. Six months were spent upgrading the airport’s runway to allow it to receive larger aircraft. Once operational, the airport will be able to accommodate five million passengers per year.

La Residence Hotel along the Perfume River in Hue. 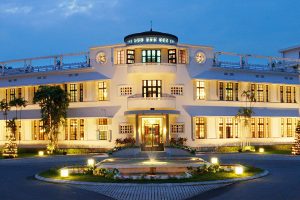