HUE, Vietnam (Nov. 6, 2013) — In a land of roving vendors, sidewalk eateries and outdoor BBQ plazas, Chef La Thua An is one of a handful of classically trained Vietnamese chefs working to reinvent the country’s informal fare as gourmet cuisine.

In the ancient Imperial City of Hue, Chef An is executive chef at Le Parfum, a 178-seat fine-dining restaurant set in the 1930s art-deco hotel La Residence along the Perfume River. Last week Le Parfum debuted a new a la carte dinner menu, wine list and dessert menu. Four in five dishes off the new menu are Chef An’s original recipes or his modern take on Vietnamese classics, perfected over the past several months.

“Hue’s culinary heritage focuses on delicately balanced flavors and sophisticated presentation; but while refined tastes have lingered in this region, aesthetic appeal and commitment to quality has waned,” said Chef An. “The goal of our new menu is to connect Hue’s rich history and culture with the most vibrant produce from around Vietnam to create a fine-dining experience unique to this corner in the world.”

In a country that doesn’t normally serve meals by courses, one look at the chef’s selection of Vietnamese tapas, four elements of Le Parfum entree, or sweet eggnest dessert–lovingly presented under a bamboo birdcage–is enough to reveal an approach that’s on an entirely different level from the current regard for Vietnamese cuisine.

For those who want to delve further into Vietnam’s varied culinary traditions, there’s an entire Vietnamese discovery selection showcasing elaborate regional delicacies, which must be ordered six hours ahead.

Even in the Continental corner of the menu, where Chef An showcases his global repertoire, local references abound: the thyme smoked young cockerel evokes something of Hue’s cockfighting pastime, the crustacean bisque is scented with an emulsion of Mandarin essential oil, the pumpkin soup is laced with Phan Thiet vanilla. The star of Chef An’s take on French cooking with Vietnamese ingredients is a five-course degustation menu with accompanying wines.

“Le Parfum has built a reputation as a surprise stop for haute cuisine right in the centre of Vietnam,” said Phan Trong Minh, the hotel’s general manager. “That’s something no other restaurant in the region can truly claim.” 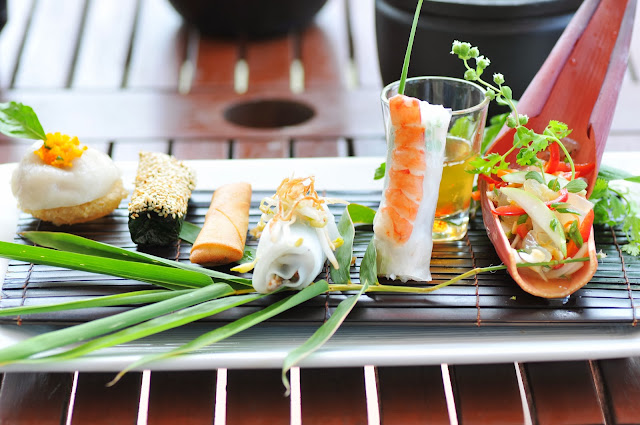